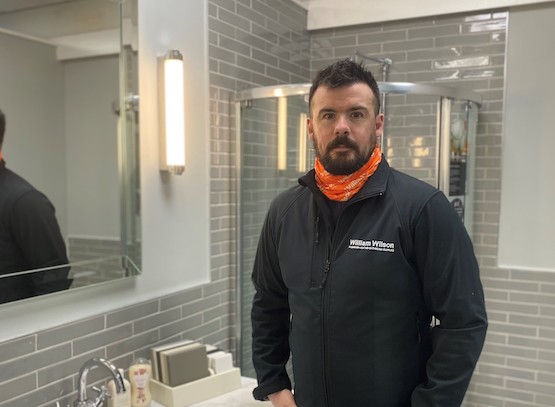 In his 15-year Wolseley, or more specifically, William Wilson career, Matthew Wicks (pictured) has gone from a Warehouse Operative to Branch Manager, having also held posts as a Sales Assistant, Assistant Manager and Business Development Manager in between, in Thurso, Kirkcaldy and Edinburgh.

Now, having reached the milestone earlier this month, we caught up with our experienced and well-travelled colleague to discuss his career, his current role and what he gets up to in his spare time.

So, Matthew, what do you enjoy most about your role?
The day-to-day challenges of being a manager, from dealing with different people in different roles, such as suppliers, customers, my colleagues, and those in support centres. The good thing about my role is that no two days are the same - particularly when it comes to dealing with large scale contracts from the branch, to the public and in the showroom.

What difference do you feel you’ve made during your time at Wolseley?
I feel I have made a small difference during my time with Wolseley. I have worked in a number of branches that during my time have increased sales and profit for the company year on year.

Who’s had the biggest influence on your career to date?
My biggest influences in my career have been my supporting managers, from my first manager Alasdair Rendall (now the Branch Manager at William Wilson Orkney), to George Balloch (who is no longer with the business), and David McKissack (William Wilson south Area Manager). All three have played influenced me and have played a part in my career in different ways.

What’s the best piece of advice you’ve ever been given?
Accept that it doesn’t always go correctly the first time but don’t take it to heart. Just treat like a training exercise - reset and go again!

What was your dream job growing up?
I always wanted to become an architect.

What are your biggest hobbies away from Wolseley?
I was an avid rugby player, and still support my local team in Edinburgh, Lismore, when I'm able to.