Getting to know Callum Redpath 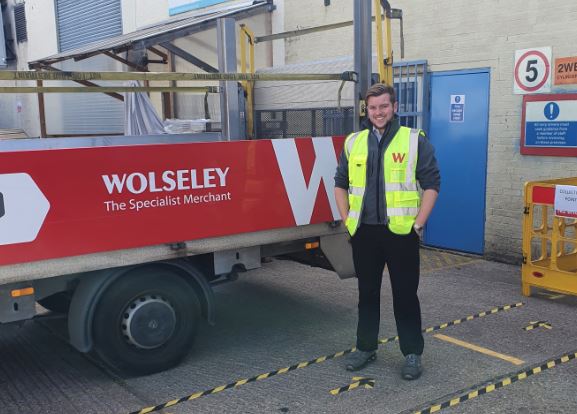 Callum Redpath is another one of our great Wolseley success stories, having recently been appointed King's Cross branch manager. He started out as a technical sales advisor less than two years ago, and so we were keen to discover more about what makes him tick, and of course, to learn more about his Wolseley journey to date.

So, Callum: what brought you to Wolseley?
In April 2018, I left a job I loved as there was no chance of progression to take on another role that promised the world and delivered very little, so I began job searching once again.

It was at this point that I was advised by my soon-to-be brother-in-law Pete, who was (and still is) deputy manager of our Watford branch, to apply for Wolseley. He had been working for the company for nearly four years at the time and was not just enjoying it, but also progressing his career. For someone with progression on their mind, he said it was the perfect place to build a reputation and rise through the ranks.

Wolseley ticked all the boxes – a competitive wage, something new every day and a chance at progression.

What do you enjoy most about your role?
I enjoy helping my staff get the best out of themselves, whether that is adjusting workload, work practice or even work atmosphere. When they succeed, the branch succeeds and that is a great feeling.

What difference do you feel you’ve made during your time at Wolseley?
I think I have helped push a new mindset, involving forward thinking, technological utilisation and a 'go get' attitude. Having created a training syllabus to help people to get the most out of LinkedIn and currently being part of the trial group for Salesforce, I believe I have helped change some mindsets regarding utilising newer technologies and programs.

Who’s had the biggest influence on your career to date?
Gosh, there have been so many! Special mentions have to include Pete (deputy branch manager at ED Watford) who initially recommended Wolseley to me, Doug Smith (category sales manager at my branch) who helped me go from knowing nothing about the trade to having a great amount of knowledge and experience given my small amount of time in the industry. Other colleagues I should mention are Dave Jones (my regional director) and my ex-area manager James Eagles, for helping me build my ideas and having the confidence in me to offer me the promotion to branch manager.

However, the person I feel influenced me the most is my ex-manager (now branch manager of G52 Brentford) Scott Smith. He is the main driving force for me getting the publicity I did and pushed me to be the best I could be. Not only this but his style of management is incredible, and I have done everything possible to learn from him.

What’s the best piece of advice you’ve ever been given?
“It is not how people are that is a problem, it is how you deal with them that counts”. This is something my father said to me after complaining about colleagues at my first job when I was 17!

What was your dream job growing up?
When I was a child, I always wanted to be a biologist! Often being known as ‘Nature Boy’ throughout my time in school.

What are your biggest hobbies away from Wolseley?
Playing hockey, gaming, hiking, Duke of Edinburgh assessing, kayaking and visiting the local pub!

Who would you choose to play you in film about your life and what genre would it be?
I would hope for a James Bond-esque film, but in reality, it would be more like Oliver Hardy in a Slapstick Comedy.