Ferguson plc is the world’s leading specialist distributor of plumbing and heating (HVAC) products serving residential, commercial, civil and industrial customers primarily in the Repair, Maintenance and Improvement markets. Our plumbing product category includes residential and commercial plumbing fixtures and pipe, appliances, lighting fixtures and fire protection products, This statement is made pursuant to the UK Modern Slavery Act 2015, Section 54, and describes the steps Ferguson plc and its group of companies (“Ferguson”) have taken during the fiscal year ending July 31, 2020 to prevent slavery and human trafficking in our global supply chain. Key areas of focus in FY20 included:

Enhancing due diligence activities performed on global suppliers by:

Ferguson operates in three geographic regions - the United States, United Kingdom, and Canada through 2194 branches spread across these regions. We employ approximately 34,000 associates and supply over one million customers, primarily local tradespeople who operate within 20 miles of our branches. Whilst collectively, Ferguson buys products from approximately 39,000 suppliers in 40 countries, each business establishes its own supplier network. The chart below highlights key features of our regional supply chains. 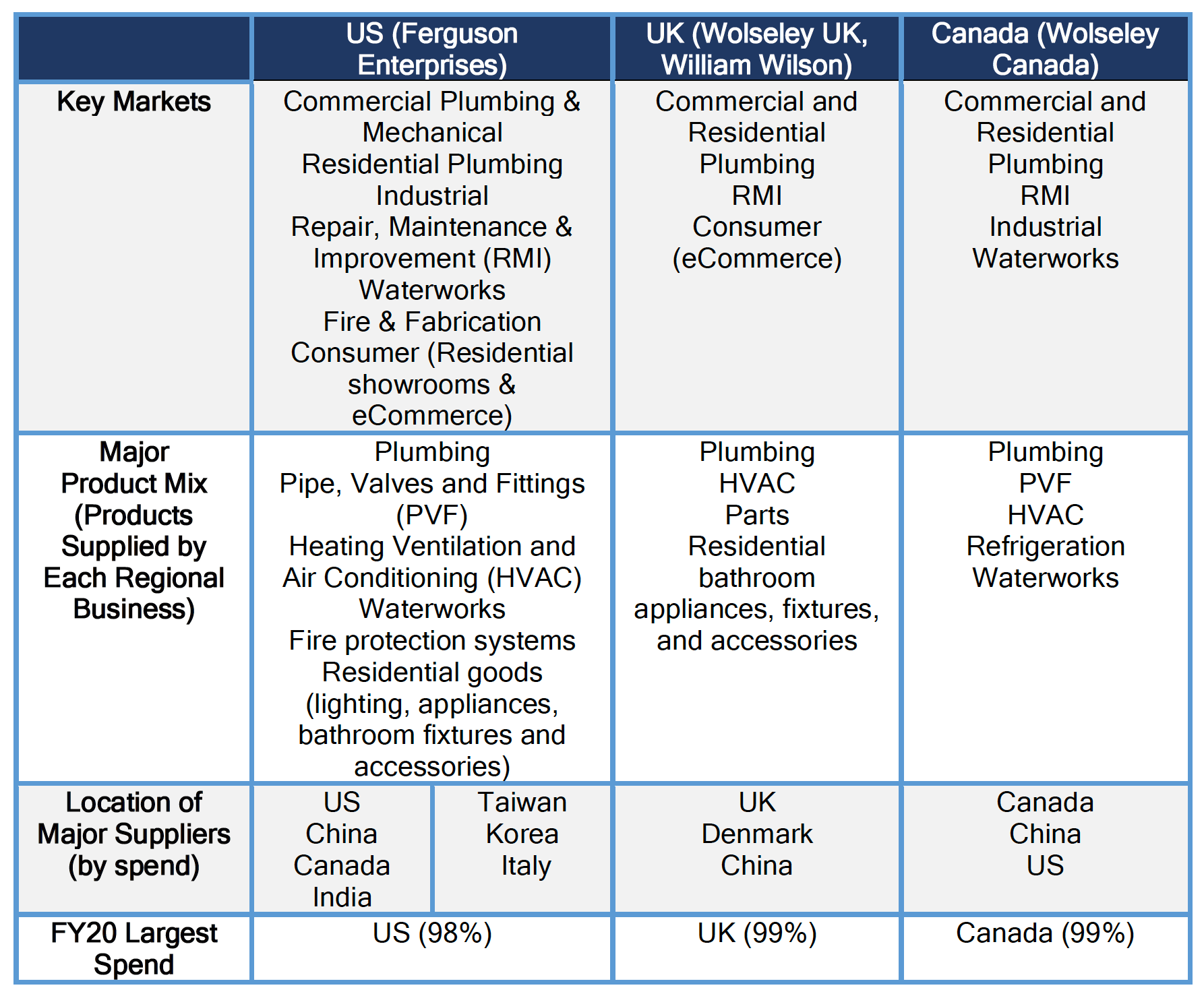 Ferguson holds itself to high standards of business integrity and ethical conduct. Committed to extending the principles of the UN Global Compact and Universal Declaration of Human Rights to our workforce, we have adopted policies to foster a respectful environment where associates have a right to freedom of association and are treated humanely and free from harassment or discrimination in safe and secure workplaces. These principles are embedded in our Group Code of Conduct and company-specific Codes of Conduct adopted by our regional businesses. Our Group Code of Conduct was updated in FY19 and includes Ferguson’s commitment to protecting human rights and ensuring our suppliers adopt fair labor practices.

Our associates, including those employed by our sourcing affiliates in China and Taiwan, are trained on the Code of Conduct and are encouraged to “speak up” about any situation or condition believed to violate our fundamental employee welfare standards. Moreover, the Group Whistleblower Policy and Speak Up! hotline offer a confidential mechanism for associates to report (anonymously, if requested) any incidents of unfair treatment – protected from retaliation by management. During this past fiscal year, no reports raised concerns related to modern slavery or human trafficking at any Ferguson location.

Compliance to our policies is monitored via financial controls, internal audit, management oversight, security procedures and via Speak Up! reporting. Corrective action for non-compliance with Ferguson policies depends on the severity of the situation but can range from counseling and training to termination of the associate’s employment.

Of the more than 34,000 workers at Ferguson, less than 3% are supplier contracted workers and 1% are temporary employees. Temporary employees fill numerous functions across the organization and contracted workers fill mainly IT, security and financial functions in all three branches. Our UK employee, contractor and service provider contracts contain provisions that address compliance with the Modern Slavery Act.

B. Our Supply Chain

Ferguson also holds our suppliers to high standards of ethical conduct and treatment of workers. The Group Product Integrity Policy codifies our commitment to source from ethical suppliers to ensure the products we supply are safe, reliable, and manufactured by companies that share Ferguson’s values of integrity and respect for the human dignity of workers.

Our businesses have adopted the Group Product Integrity Policy by including the policy framework in their respective supply chain processes. Suppliers are contractually obligated to respect human rights – a cornerstone of the ethical component of our product integrity programme. For example, agreement to respect human rights and refrain from use of child, forced, or involuntary labour are explicit contractual provisions in the UK business’s terms and conditions of purchase, whilst our Canadian business requires its major suppliers to execute its Supplier Standard Agreement, which requires compliance with human rights laws and ethical standards found in the Group Code of Conduct.

Ferguson has achieved notable success during FY20 to bring major suppliers of its regional operations under contractual human rights commitments. Over 1,900 suppliers have contractually pledged to abstain from use of child, forced, or involuntary labour in their operations (7% increase over FY19). Approximately thirteen percent (13%) of these major suppliers are in countries with a prevalence of modern slavery according to The Global Slavery Index.

Ongoing Due Diligence, Monitoring of Suppliers and Training

Using a third-party software program, Ferguson screens new and existing suppliers for reports of ethical or modern slavery concerns. The monthly screens ensure that we capture new information that comes to light after a new supplier is uploaded in the system. During FY20, the ongoing screening process identified no red flags of unethical or modern slavery incidents involving any of the thousands of screened suppliers.

All businesses have incorporated, to varying degrees, ethic and anti-slavery elements in their supplier audit methodologies. Our Global sourcing associates have been trained in-person on modern slavery issues and during FY20, 133 audits were performed on suppliers in Asia. None of the FY20 supplier audits identified non-compliance with Ferguson’s ethical standards regarding MSA compliance. As with product integrity issues, Ferguson would require a corrective action and mitigation plan if any unethical or modern slavery concerns were identified and would in this way train suppliers on these issues in order to bring them up to performance standards. In addition to the initial audits, we visit and re-audit our suppliers periodically based on risks associated with product integrity and more recently based on the risk assessment tool described below. These additional touchpoints allow us to monitor the suppliers’ continued commitment to our Supplier Code of Conduct.

We continue to harmonize practices across the businesses and in FY20 centralized our audit processes. In addition, we have continued to develop the auditing team’s capabilities through training and practical experience which has further increased our sourcing and product integrity teams’ understanding of our global suppliers’ operations beyond quality considerations.

Ferguson primarily sources manufactured goods from suppliers in North America and Western Europe where the risk of forced, involuntary, or child labour in manufacturing activities is relatively small. Thus, whilst we have included domestic suppliers in our anti-slavery activities, effective risk management calls for focused attention on our international suppliers. This year, we continued to deploy our risk assessment tool to prioritize our activities. Using extensive research published by human rights NGOs1 the tool employs three criteria:

International suppliers will be rated using these criteria with the level of engagement correlated to the supplier’s rating. For example, application of this tool will direct high priority engagement to suppliers in China, India, or Turkey compared to suppliers in Japan or South Korea. High priority engagement will entail review of the supplier’s employment practices, increased frequency of on-site monitoring and audits, work plans for corrective action, and capacity building activities to support the supplier’s adoption of specific anti-slavery controls. Prioritization of engagement with suppliers, regardless of spend, will ensure effective deployment of resources in our anti-slavery compliance program.

The vendor approval and onboarding processes include compliance due diligence steps at several points in the process and apply the risk assessment tool to identify compliance requirements at different risk levels based on geographic location. This process continues to be refined and harmonized with other business branches.

Our risk-based supplier due diligence and engagement ensures on-going interaction with high risk suppliers which will enable us to monitor their adoption of anti-slavery controls. We will also continue to monitor best practices as they develop in sectors relevant to our business, consulting with external stakeholders as appropriate to help strengthen our efforts. We are members of CSRBoard.org, and Boston College Center for Corporate Citizenship. These groups provide resources and guidance regarding detecting and eliminating human rights abuses both throughout the business and in the supply chain.

Building Upon Our Progress

Ferguson continually improves measures to combat forced, involuntary, or child labour in our global supply chain and strives to reach 100% agreement to our SCOC. Our work to implement and harmonize the risk assessment tool in our supply chain vendor management program will continue in FY21. As part of this we will continue to provide training and practical experience to our audit team to help ensure our ability to perform supplier audits that meet increasing program demands. These efforts continue to expand the awareness of our global associates about modern slavery risks and red flags.

Ferguson remains steadfast in our commitment to detecting and eradicating any form of modern slavery in our global supply chain. By our actions, our major suppliers will know that humane treatment of their workers is just as important as the quality of goods supplied to Ferguson.

This statement is made on behalf of all subsidiaries of Ferguson plc pursuant to section 54(1) of the Modern Slavery Act. It has been approved by the Ferguson plc Board of Directors and signed on its behalf by: