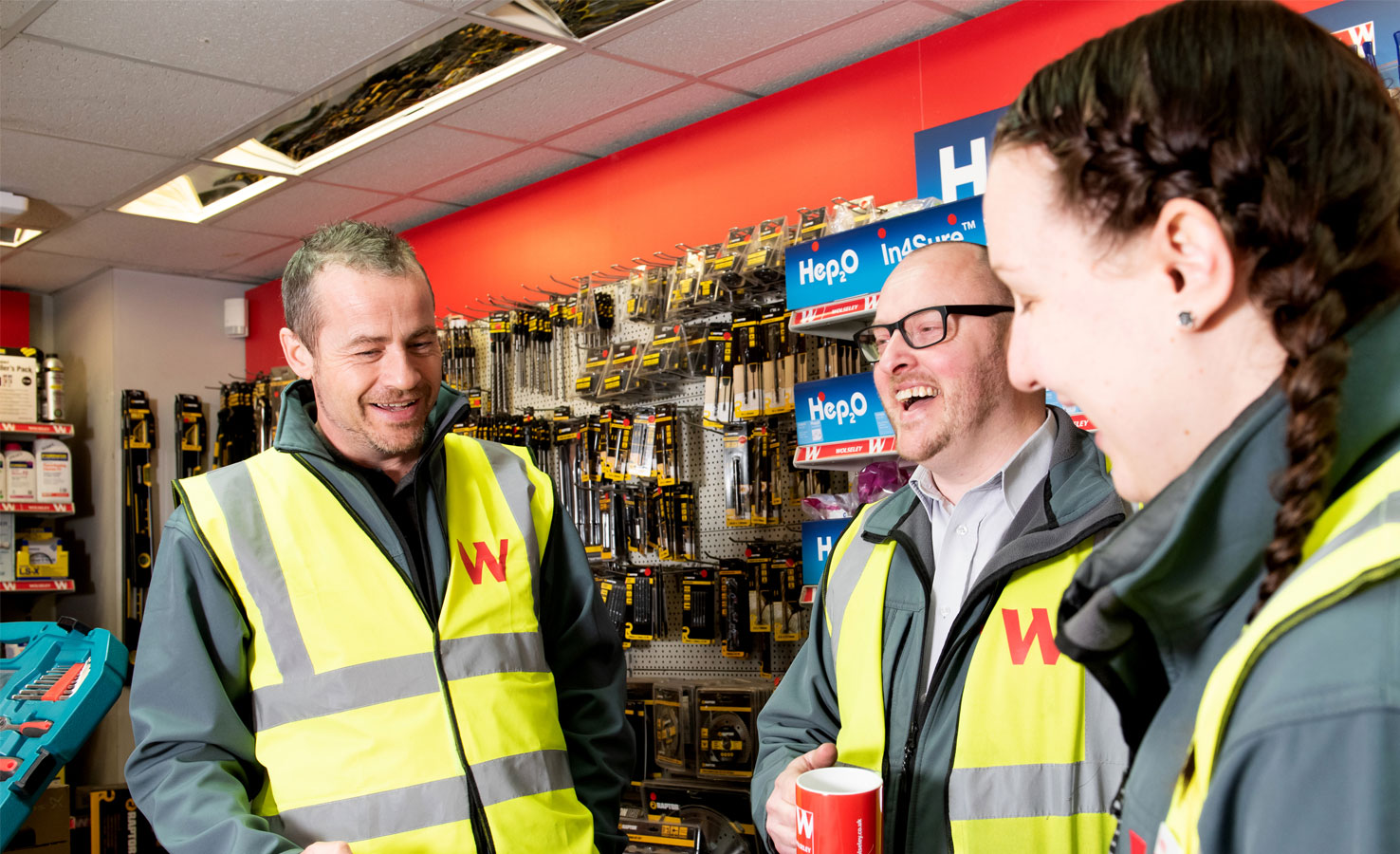 Back to the floor…

It’s 7am at Wolseley Peterborough. A man is cheerfully unloading pallets of new stock from a van ready for opening time. It’s the start of a day back to the floor for John Hancock, Central Regional Managing Director of Wolseley. Today, he’s swapped his suit back to a Wolseley uniform and is getting stuck in at the branch.

We’re all familiar with the premise of the reality TV show Undercover Boss, where the Managing Director of a business disguises themselves and spends time with “the people on the ground”.  For John, it’s vital that his leadership team is anything but undercover – and that they remain close to front line colleagues and customers alike, in order to keep their finger on the pulse of the merchanting marketplace.

For a business as big as Wolseley – which employs more than 5,000 people across its 600 branches, offices and distribution centres – getting customer and colleague feedback is absolutely vital to delivering best-in-class customer service and ultimately the growth of the business. This year, following the rebrand of the company’s trade counters, John and his team launched a campaign which saw branch colleagues ‘bid’ for a member of the management team to go back to the floor and join them for the day.

Simon Bardell, Peterborough Branch Manager, explains, “Having senior management in branch, getting to know customers and understanding our daily routines, is really important. Here at Peterborough, we’ve doubled branch sales in the last couple of years, have dramatically shortened customer waiting time at our counter and make sure all incoming calls are answered fast, first time. We’ve made fantastic progress but there are further changes which I know we could make to keep improving customer service and growing our business. By being here and seeing it for himself, I know John will be able to help us drive through those improvements.”

"Having senior management in branch, getting to know customers and understanding our daily routines, is really important. Here at Peterborough, we’ve made fantastic progress but by being here and seeing it for himself, I know John will be able to help us drive through those improvements"

With a team of nine staff, a busy trade counter and a large warehouse, Wolseley Peterborough has grown significantly in the two years since Simon took up the mantle of branch manager. “We’ve put a lot of hard work into improving our customer service, which means we have a lot of regular customers who we know well. Following our rebrand to Wolseley from Plumb Center, our customers know that along with new signage, new uniforms and a new name, we’re still the same team, with the same great expertise, but with a wider selection of products. John being here in person lets my team and our customers know that Wolseley is committed to making even more improvements to help them serve their own customers,” Simon adds.

Aaron Thorne, team leader at the branch, reckons coming into branch beats emails and phone calls hands down: “I’ve worked in places before where they send the boss in, in his suit, to sit in the office and go through paperwork. This is different. By seeing what’s going on in branch and meeting staff and customers, John can get a far a better understanding of what works well and where we can improve.”

No stranger to working at a trade counter, John started out working in Rugby Plumb Center back in 1989. Not afraid to turn his hand to anything the business and his customers required, John became jack of all trades, working as a driver, in the warehouse, trade counter, sales rep and eventually branch manager of two branches in the Midlands. It was during this time that John discovered a passion for customer service which he’s carried with him ever since. John explains, “When I started, I was lucky in that I had a branch manager who shared details of our performance, gave me space to develop and let me learn everything about the business. I’m trying to ensure that I empower all of my teams in the same way.”

"When I started, I was lucky in that I had a branch manager who shared details of our performance, gave me space to develop and let me learn everything about the business. I’m trying to ensure that I empower all of my teams in the same way."

Returning to Wolseley and working his way through the ranks, John progressed from Key Account Manager to Central’s Regional Managing Director, and so he’s keen to make sure he remains close to those on front line of customer service.

John explains, “By spending time in branches, talking to staff and customers, shifting boxes, processing orders, myself and my team can really get a real feel for what issues might stop our people delivering even greater customer service. My job is to ensure we deliver what’s needed for our customers. The Peterborough branch is one of our busiest - they’re really doing an amazing job for customers in their area and I’m working with Simon and the team to make small improvements that will help them day to day, while working on bigger improvements that they’ve suggested will be great for Wolseley – and our customers - in the longer term.”

Before setting off for Peterborough, John was looking forward to getting stuck in. The team didn’t disappoint, throwing John in at the deep end with eight pallets of radiators to unload before the working day even began. With stock cleared and shelves stacked, John spent the day dealing with customer enquiries at the trade counter, picked customer orders, attended the daily staff briefing, reviewed site safety and spent time tackling some of the paperwork in the office.

Phil Cunnington, team leader, adds, “This is the first time I’ve actually met John but he’s very down to earth and easy to talk to. Having him here is a great opportunity to improve customer service by having our voices heard on behalf of customers – we often hear things over the counter that our support colleagues just wouldn’t hear about. Plus, John is a top lad - I’d happily take him for a pint!”

Gemma Bryant, sales assistant at the Peterborough branch, agrees, “Ultimately, John being here and getting stuck in to everyday life in the branch shows that we’re never on our own – we have the support of the whole of the Wolseley team – and so do each and every one of our customers.” After a busy day, John is reflective; “One key lesson I learnt early in my career was that it’s really important to build relationships with customers. This experience has 100% reinforced that. It’s about listening, delivering service consistently and making our customers’ lives easier. That’s one thing that definitely hasn’t changed in my time away from the front line – it is still about relationships. Our customers are rightly more demanding of us – their clients expect a fast turnaround and we need to be ready to support that 100%. I’m equally committed to making it as easy as possible for them to serve our customers brilliantly.”

John Hancock, 49, joined Wolseley’s Leadership Team as Regional Managing Director (RMD) for Central and Wales in June 2018. He first joined Wolseley as a Trade Counter assistant, working in Rugby Plumb Center in the Midlands in 1989. He worked his way up through the company, being a sales rep and running two branches in the West Midlands, before leaving to widen his experience outside of the company.  John continued his career in other major distribution businesses, for PTS (part of the BSS Group) and for Grahams as an Area Director, where he was also a senior operational lead for health and safety. In 2010, he returned to Wolseley, gaining further commercial experience in the Pipe & Climate business, managing major hub branches in the Midlands, and regional and national Key Accounts. He then became Regional Sales Director, Regional Trading Director, and finally Regional Director for the North in July 2017. In addition to being Wolseley’s RMD for Central and Wales, John also leads for the key Wolseley business priority of improving health and safety.